The Science of Electrostimulation

At Tenderbuck, we have spent years researching commercial electrostimulation in science journals and trade publications to identify the most important aspects and essential practices of the electrostimulation process.  I've provided links to some of these independent data sources for your review:

What better place to start than Wikipedia?  They get it mostly right in their discussion on Rigor Mortis, with the exception of their suggestion that carcasses are stimulated with alternating current.  Most industrial research suggests that a pulsed DC current be used to stimulate the carcass.  At Tenderbuck, we have developed our device to provide the industry-standard frequency and duty-cycle, with the added benefit of polarity reversal to increase the overall effectiveness of the process.

The Journal of Meat Science issued what we consider to be the grand-daddy of all papers on electrostimulation.  The paper addresses all the nuts-and-bolts, including pulse width, duration after slaughter, voltage level, length of stimulation time and carcass temperature, among other things.  Supplementary research on the benefits of electrostimulation can be found here. 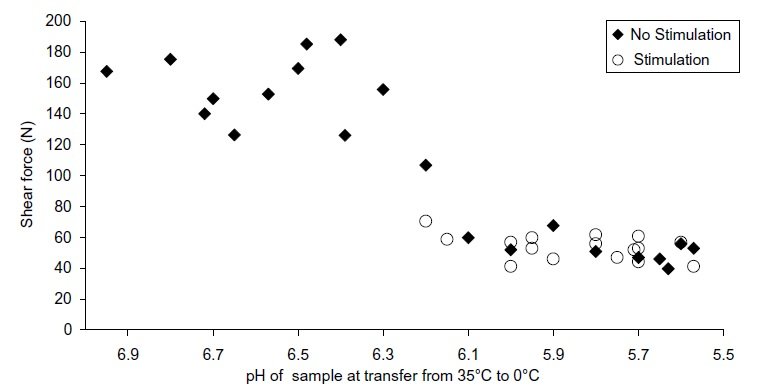 Here is an interesting read on Benjamin Franklin, meat coloration and a little bit of bio-chemistry explaining why electrostimulated meat is more tender.

And This Paper on low-voltage electrostimulation of Lamb really gets into the biochemistry weeds, but confirms that electrical stimulation improves tenderness through both biochemical changes (accelerated pH decline) and muscle fiber rupture (physical tearing of the musculature).

At Tenderbuck, we believe that nothing succeeds like success, and the fact that our product is the only field-tested large-game portable electrostimulation device, and Tenderbuck stimulated meat is served by top-tier chefs in the finest restaurants in the country, is proof enough that this should be standard equipment for every serious meat-hunter.


So how does this thing work?

How does it get rid of the gamey taste?

I usually hang the carcass and/or ice the meat for four or five days.... Won't that do the same thing?

NO, although we understand that a lot of people ice their meat, icing the meat can cause cold-shortening, which can make the meat tough.  Wikipedia has an excellent page here addressing rigor-mortis, cold shortening, and electrostimulation...

"Rigor mortis is very important in meat technology. The onset of rigor mortis and its resolution partially determines the tenderness of meat. If the post-slaughter meat is immediately chilled to 15°C (59°F), a phenomenon known as cold shortening occurs, where the muscle sarcomeres shrink to a third of their original length.

Cold shortening is caused by the release of stored calcium ions from the sarcoplasmic reticulum of muscle fibers in response to the cold stimulus. The calcium ions trigger powerful muscle contraction aided by ATP molecules. To prevent cold shortening, a process known as electrical stimulation is carried out..."

By using electrostimulation, you will get much more blood out of the carcass before it starts to coagulate.  We still recommend you hang the animal while you field-dress to allow the animal to continue to bleed out, but extended icing of the meat to achieve bleed-out should no longer be necessary.  By bleeding out the animal using the electrostimulation process, you achieve better results in a shorter time.

Is the animal dead when you do the electrostimulation?


Yes.  You should apply the electrostimulation process as soon as possible after the animal was killed.

How long after you shoot the animal can you wait to do this?


The sooner the better.  The effectiveness of electrostimulation starts to decline as soon as the animal is killed.  We recommend that you electrostimulate within 10 minutes.  If you've waited over 20 minutes, you've probably waited too long.

So do I do this before or after I field-dress the animal?


You perform the electrostimulation as soon as possible after you kill the animal.  First, cut the carotid artery so it can bleed out, then hook up the stimulator and let it run.  It takes less than two minutes, and it will have a big impact on the quality of your venison.

Can I do this on individual pieces of meat?


No.  It only works on a freshly killed animal.

Can I use it on my husband/wife/kids/brother/employees?


We've engineered the Tenderbuck Electrostimulator to know when it's hooked up to a dead animal and when it's hooked up to one of your hunting buddies.  If the stimulator isn't properly connected to a carcass, you'll see that the orange lights will flash, and the device will just turn itself off.  That's our integrated safety feature (patent pending).  If it isn't connected to a carcass, it won't work.

How many volts does it put out?


For many years at Rolls Royce, whenever asked about the horsepower of their motor-cars, the standard response was "Sufficient".  We have done extensive testing to verify that the power, performance and reliability of the Tenderbuck Electrostimulator is "Sufficient".  However, for those of you still curious, our peak voltage is controlled by the internal microprocessor at ~120V to ~140V.  The current through the animal varies depending on the carcass resistance, the quality of the electrical connections, and the instantaneous stage of the electrostimulation process.  While the animal response decays after about a minute, this does not imply a change in applied voltage, it is just an indicator that the process is working.

How big is it?


The Tenderbuck Electrostimulator packs a big punch in a small footprint.  Coming in at 9", x 8" x 2.25", and weighing under 4 lbs., the device is easily portable.  Combine that with the fact that a single charge on the unit's internal lead-acid battery is enough to treat 10-15 animals, and you're getting a lot of bang for your buck.  Or Bucks, as the case may be. 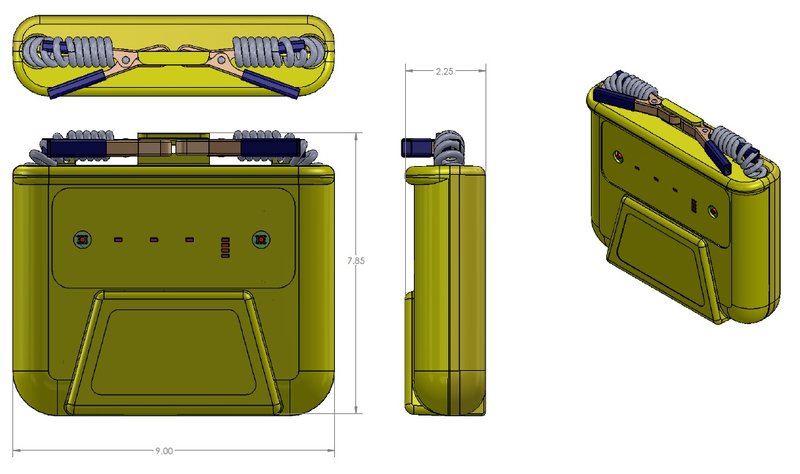